Want to teach about changing gender norms in the 19th and 20th century? Join us for this educators’ webinar on October 6!

Please note: This webinar is primarily for 8-11 Grade teachers, but all teachers from all grade levels are welcome to join.

The California History-Social Science Framework encourages teachers to discuss how conflicts change history, how people are included or excluded in history, and how gender roles can impact history. Historians have documented how gender roles began to change in the periods of the Civil War, Slavery, Reconstruction and the Harlem Renaissance. One relatively unknown person who challenged gender norms of the day was William Dorsey Swann.

Join us for a webinar with Professor Channing Gerard Joseph, who will share his research on Swann, how Swann used drag to develop community among formerly enslaved people, and how this content may be integrated in your classroom. Additionally, educator Oliver Miska will share how he has taught these topics in the classroom.

The cost of this one-time webinar is $30. To ensure quality experience, space is limited. Register today to claim a spot!

Attendees of this webinar are also invited to a follow up collaborative conversation on Tuesday, October 13th from 3:30–4:30pm. Attendees can share their reactions, ideas, and resources to better understand and teach this topic. Dr. Rob Darrow will guide the conversation and create a shared document based on the discussion.

Professor Channing Gerard Joseph is an award-winning journalist whose varied teaching and research interests include creative nonfiction, race and ethnicity, gender and sexuality, and social justice. He is the winner of a Logan Nonfiction Fellowship, a Whiting Creative Nonfiction Grant and a Leon Levy Center for Biography Fellowship for his forthcoming book House of Swann: Where Slaves Became Queens (Crown). The highly anticipated work tells the true story of William Dorsey Swann — a formerly enslaved African American man who became the world’s first self-described drag queen, risking his life and livelihood to create a secret world of balls in 1880s Washington, D.C. He is a lecturer in the USC Annenberg School for Communication and Journalism.

Oliver Miska is an 8th grade U.S. History and ELA teacher in Seattle, Washington. As a queer person, Oliver believes in the powerful impact LGBTQ-inclusive curriculum can have on all students. He likes to remind his students of James Baldwin’s words:  “American history is longer, larger, more various, more beautiful, and more terrible than anything anyone has ever said about it.”

Erik Adamian, Associate Director of Education at ONE Archives Foundation.

This webinar is co-organized by ONE Archives Foundation and Our Family Coalition. 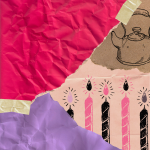 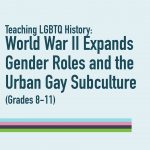