A temporary outdoor exhibit on view at 8954 Santa Monica Boulevard, West Hollywood, CA 90069 (Southwest corner of Santa Monica and Robertson Boulevard) from December 1- 31, 2020. Free and open to the public.

It’s Not Over: Posters and Graphics from Early AIDS Activism is a temporary public art exhibit that acknowledges the longstanding fight for resources and respect for people living with HIV/AIDS. Mounted for World AIDS Day on December 1, 2020 in West Hollywood, It’s Not Over amplifies voices of AIDS activists and community organizers by featuring a curated set of activist posters and images from mid 1980s to late 1990s selected from ONE Archives at the USC Libraries. This exhibit is curated by Umi Hsu, Jaime Shearn Coan, and Fati Beck; and organized by ONE Archives Foundation.

The exhibit includes pamphlet graphics by Keith Haring, picket signs from historic protests in Los Angeles and New York, flyers for the first ACT UP/LA meeting in 1987 and Gay Men of African Descent (GMAD), safer sex campaign posters featuring men and women of color, World AIDS Day and Day Without Art posters, and more. World AIDS Day was first observed by the World Health Organization in 1988; it continues into the present with ever-shifting emphasis. The exhibited images recall earlier periods of organizing and resistance, which can help to galvanize us in the present.

In the style of Yoko Ono and John Lennon’s protest art messaging: “War Is Over! (If You Want It),” this public art exhibit disseminates an important reminder that the HIV/AIDS epidemic is not over, with 38 million people living with HIV globally in 2019. And as we know, its ongoing impact disproportionately affects the Black community. As of 2018, 42% of new HIV cases have occurred within the Black community, which only makes up 13% of the US population. The “It’s Not Over” message, coupled with a diversity of experiences represented through the selected images, illustrates a multi-perspectival story of HIV/AIDS activism and highlights the longstanding struggle against HIV discrimination. 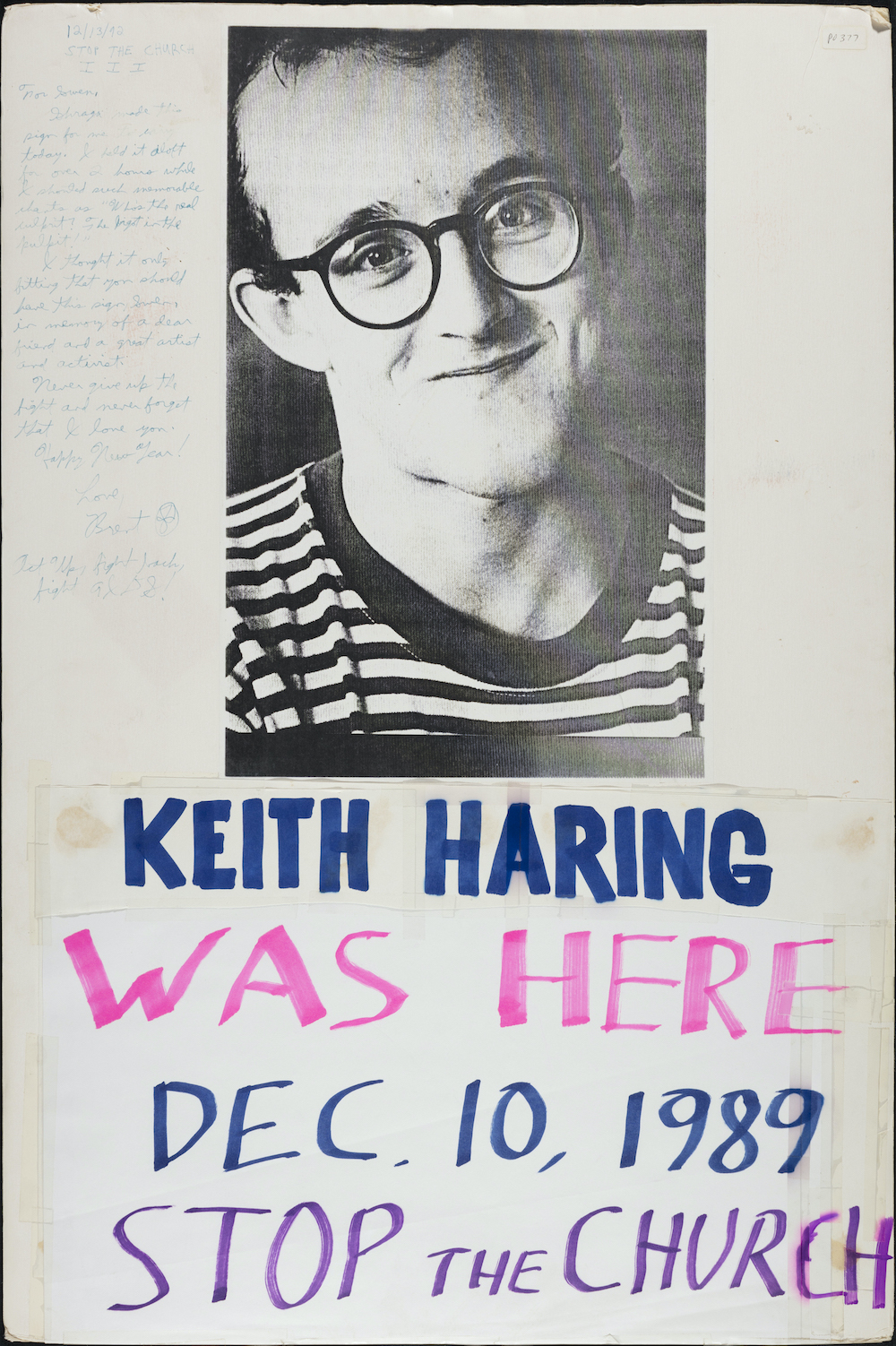 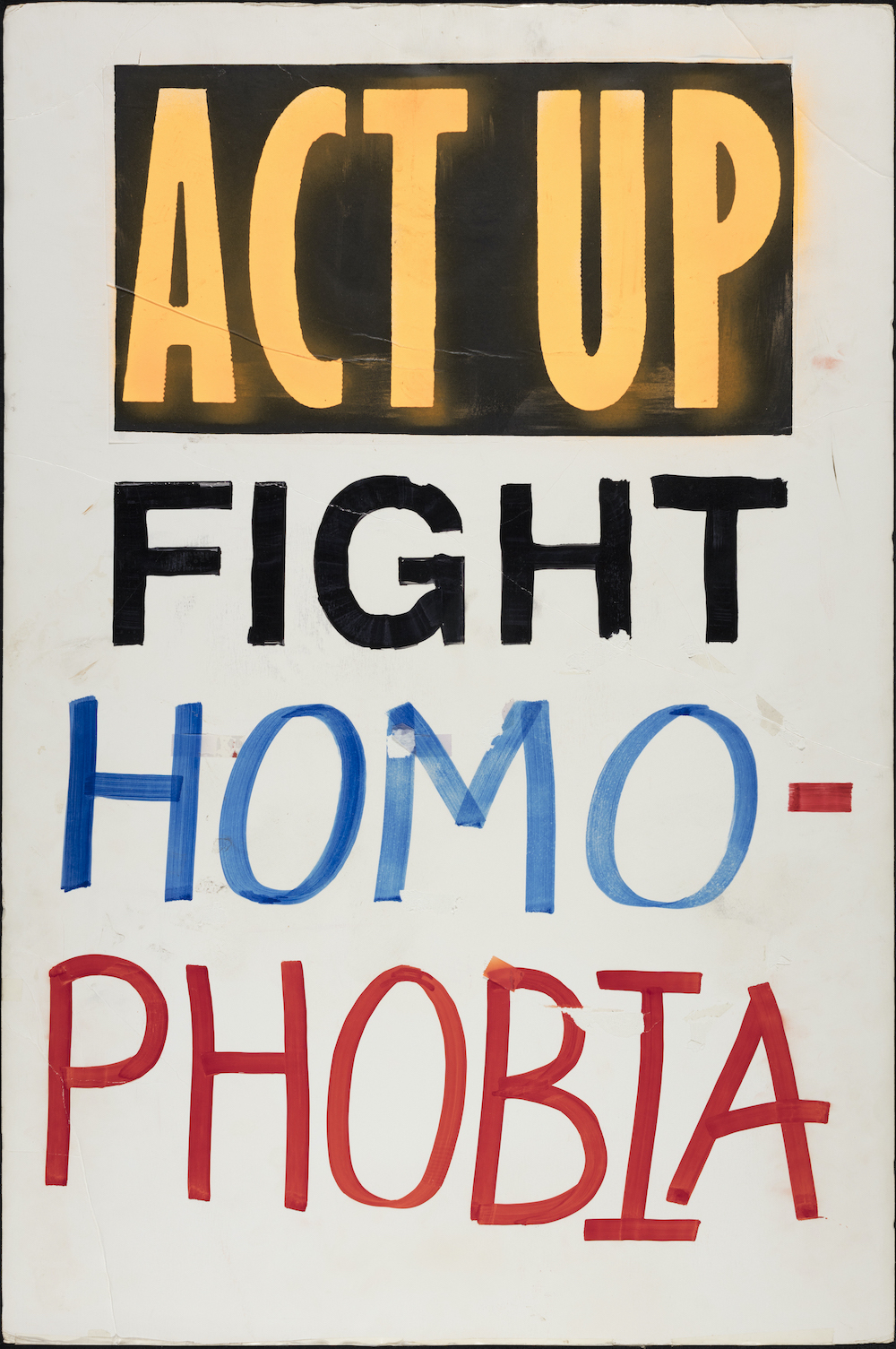 Two-sided picket sign. Side 1 features blue, pink, and purple text on white background. The upper half of the picket sign contains a black and white image of Keith Haring. Side 2 features yellow, black, blue and red hand-drawn text including ACT UP logo. Original sign is 76 x 51 cm.

The center of the poster contains a red and white drawing over a yellow background of four figures with their arms interlocked; their heads in shapes spelling out “SIDA.” Blue text on white background. Text reads: “Día mundial del SIDA–1 de diciembre de 1995.” From American Association for World Health. Original poster is 43 x 56 cm.

Image: “Sharing the Challenge,” 1991. LGBTQ Poster Collection, ONE Archives at the USC Libraries.

Image is a black and white drawing of Rev. Carl Bean over a pink triangle. Reverend Carl Bean, now Archbishop Carl Bean, founded the Unity Fellowship Church Movement as well as the Minority AIDS Project in LA. He is also the singer of the 1975 disco hit “Born This Way.” This is one of a series of picket signs that were carried by ACT UP members in the Long Beach and Los Angeles pride parades in 1989. Original sign is 122 x 82 cm.

Crowd of hand-drawn figures collectively shouting: “No on 64!” Black text on dark yellow background. Pamphlet made in response to California ballot Proposition 64, also known as the LaRouche Initiative on the November 4, 1986 ballot. Prop 64 proposed universal HIV testing and threatened to quarantine those diagnosed as HIV positive.

Dancing for our lives! : a dance benefit in support of persons with AIDS

White text over blue background. The left margin contains details pertaining the event. The majority of the poster is comprised of a blue-tinted, black and white photograph of nine bare-chested male dancers leaping in the air. Benefit performance for Gay Men’s Health Crisis, Inc. Original poster size is 28 x 41 cm.

Image: “Dancing for our lives! : a dance benefit in support of persons with AIDS,” 1986. LGBTQ Poster Collection, ONE Archives at the USC Libraries. 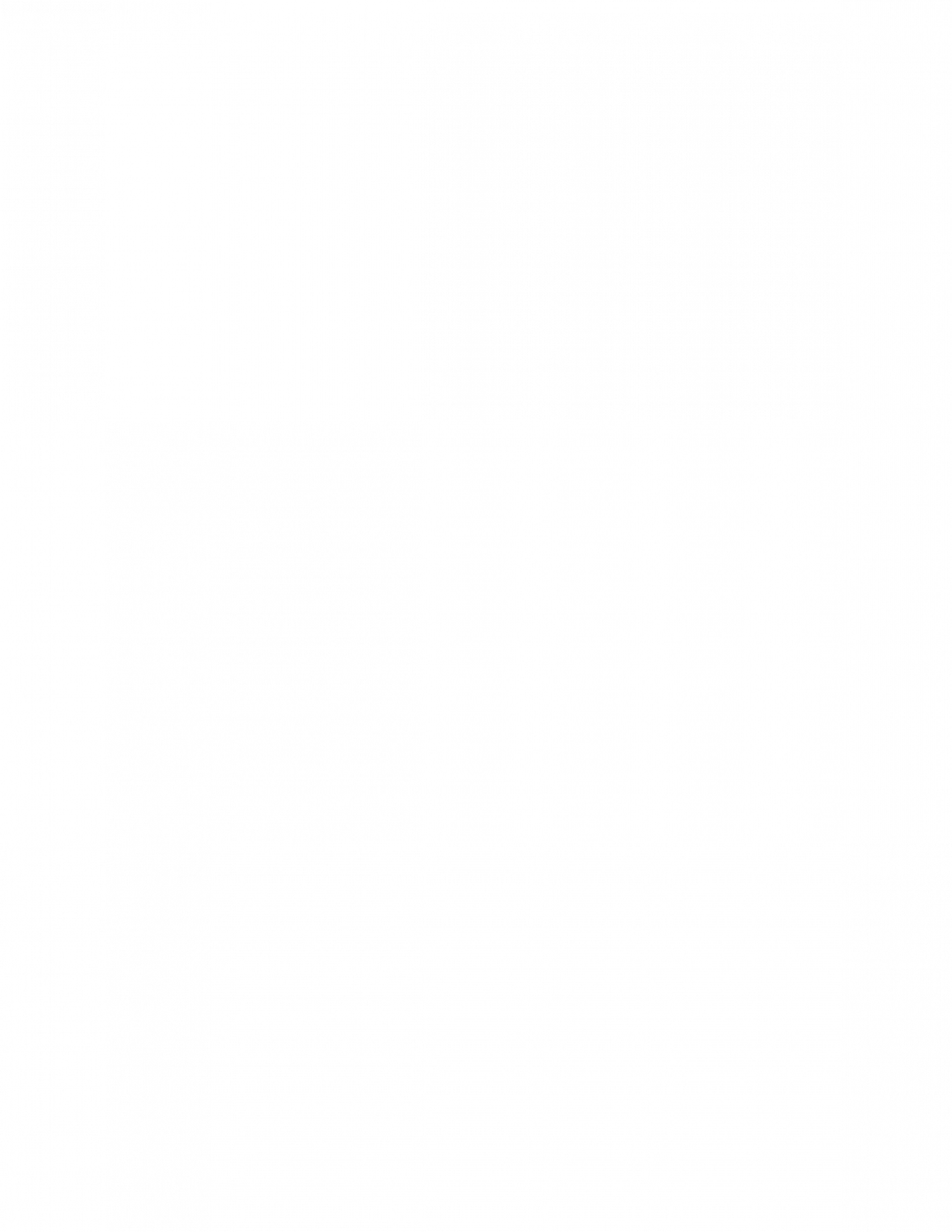 Women don’t have AIDS, they just die from it

ACT UP Atlanta CDC demonstration flyer, black text on white background. Text reads: “65% of HIV positive women get sick and die from HIV-related chronic infections that don’t into the Center for Disease Control definition of AIDS. Excluded from this definition, women are denied access to what little healthcare exists for people with AIDS. The CDC must expand definition of AIDS to include the opportunistic infections common to HIV positive women.”

Day Without Art: The International Day of Action and Mourning in Response to the AIDS Crisis

Image: “Day Without Art: The International Day of Action and Mourning in Response to the AIDS Crisis,” 1996. LGBTQ Poster Collection, ONE Archives at the USC Libraries.

The upper half of the poster contains a black and gray graphic of a television set with “AIDS Watch” written in white in the center of the screen. Black text on white paper. Text reads: “24 hours; 42,000 names; the 9th Annual World AIDS Day.” From CommuniTV, West Hollywood, CA. Original poster is 38 x 28 cm.

Week of Outrage (“safe sex vending” and the “dance of death”)

Flyer from The Women’s Caucus of ACT UP LA. Image features black background with white border, black and white cut-out triangles overlaid with text in black and white. Event descriptions and contact info for ACT UP/LA.

Image: “Week of Outrage (safe sex vending and the dance of death),” 1990. Judy Sisneros ACT UP/Los Angeles Records, ONE Archives at the USC.

We are not afraid of Uncle George: he has AIDS, we love him!

Red and green text written in children’s handwriting on white paper. The upper half of the poster contains a black and white photograph of a man between two young girls. From Minority AIDS Project. Original poster size is 43 x 28 cm.

Image: “We are not afraid of Uncle George: he has AIDS, we love him!” 1989. LGBTQ Poster Collection, ONE Archives at the USC Libraries.

Poster from ACT UP LA: black text on white background announcing demonstration at the CDC in Atlanta on December 3, 1990.

Red, yellow, and blue text on black background. The upper half of the poster contains an illustration of a black human figure with a blue spiral in the center of the chest on yellow background. Text reads: “A benefit for the Northern Lights Alternative. Providing care and counseling for people with AIDS and HIV. Tuesday, November 19 beginning at 8 pm till 2pm. Twenty-one and older.” Original poster size is 66 x 56 cm.

The center of the poster contains a drawing of human figures holding hands around the earth; each corner of the drawing contains a red ribbon. Purple and black text on white background. Text reads: “AIDS and families; protect and care for the ones we love.” From American Association for World Health. Original poster is 56 x 43 cm.

I can’t afford to be sick. Can you?

The center of the poster contains a black and white photograph of a man in a white t-shirt and leather jacket. Right margin contains white text on black background. Text reads: “Don’t take chances. The HIV virus that causes AIDS can be a killer. If you already have the virus, treatment will keep you healthy. If you don’t have it, you can make sure you don’t get it. Call today for a blood test. It’s free. It’s painless. They won’t even ask your name. Bi-lingual counselors are there to help. No one needs to know. Only you. You can’t afford to be sick. Don’t wait.” From the AIDS Health Project. Original poster is 46 x 31 cm.

Image: “I can’t afford to be sick. Can you?” date unknown. LGBTQ Poster Collection, ONE Archives at the USC Libraries.

Tired of Hearing about HIV?

Red and brown text over white background with numerous gray silhouettes of human figures. The center of the poster contains a red cross with white silhouettes of human figures inside. Text reads: “Tired of hearing about it? Having it is murder! Think Positive. We are all living with AIDS. Start acting like it! Day without art; the 5th international day of action and mourning in response to the AIDS crisis; December 1, 1993; a project of Visual AIDS.” Original poster is 92 x 61 cm.

Image: “Tired of Hearing about HIV?” 1993. LGBTQ Poster Collection, ONE Archives at the USC Libraries.

Living with AIDS: A Self-Care Manual

Book cover featuring repeating diagonal black text that reads “LIVING ” on white background overlaid with a box containing more text with the title “Living With AIDS: A Self-Care Manual” and “A Publication of AIDS Project Los Angeles” in black and red text.

The upper half of the poster contains a black and white photograph of Veronica Everett-Jones and Pattie LaBelle. Black text on orange and white background. Text reads: “Cheap medicine can protect you from PCP, the killer pneumonia of people with HIV or AIDS.” From National Minority AIDS Council. Original poster is 90 x 60 cm.

Day Without Art: The International Day of Action and Mourning in Response to the AIDS Crisis

The center of the poster contains a black and white photograph of paintbrushes and dirty sneakers on a wood floor. Red and white text on black background. Text reads: “Get the facts; educate others; show you care; contribute financially; speak out; fight prejudice; protect yourself; respect others; remember. A project of Visual AIDS; December 1 1991.” Original poster is 92 x 61 cm.

Image: “Day Without Art: The International Day of Action and Mourning in Response to the AIDS Crisis,” 1991. LGBTQ Poster Collection, ONE Archives at the USC Libraries.

Remember Their Names: Fight for the Living

Upper half of the poster contains black and pink text on white background; lower half of the poster contains white text on black background. The center of the poster contains a black silhouette of a protest crowd looking on to a pink and white graphic of the AIDS quilt on display on the National Mall in Washington, D.C. Text reads: “1) release AIDS drugs now! 2) emergency federal program to end AIDS now! 3) end HIV related discrimination! 4) quality healthcare for all! Shut down Federal Building. Demonstration and mass civil disobedience.” Demonstration poster made by members of ACT UP LA. Original poster is 56 x 43 cm.

Image: “Oct 6: Remember Their Names: Fight for the Living,” 1989. LGBTQ Poster Collection, ONE Archives at the USC Libraries.

White text over a graphic of a horizon with a sun shining over; a large red ribbon and a gray globe in the center. Text reads: “One world one hope.” From American Association for World Health. Original poster is 56 x 44 cm.

Black and green text on gray background. The upper portion of the poster contains a black and green biohazard symbol. Text reads: “AIDS Zone. Where as we now? Fewer people are dying of AIDS. More people are living with AIDS: contributions are down, ‘volunteering’ is down, the healthcare system is crumbling. You are still living in the middle of an epidemic. Now more than ever. Give. Work. Fight. Day without art; December 1, 1997; the ninth international day of action and mourning in response to the AIDS crisis.” From Visual AIDS. Original poster is 89 x 60 cm.

It’s Not Over: Posters and Graphics from Early AIDS Activism is organized by ONE Archives Foundation as part of its observance of World AIDS Day. With generous support from Beneficial State Bank, Morgan Stanley, RJ DiCamillo, Jennifer C. Gregg and Cj Mitchell, MJ Horne and Thomas Jones, Mark Katz: in memory of my dear and cherished friend Gloria Katz, Paul D. Lerner and Stephen Reis, Patricia Navarro: in memory of Raymond Navarro, Jeff Soref and Paul Lombardi, Richard Stanley, and ONE Archives Foundation Board of Directors.

Help us sustain exhibitions and program programs such as this exhibit by making a donation or shopping in the ONE Archives Foundation store.