After ten weeks of #Queerantine, we wonder, what history can we preserve from this period? The remembrance of queer lives is a core part of the LGBTQ storytelling. In Issue 10, we offer fodders for meanings beyond the terms of our immediate lives and lifetime. We share a poetic documentary about gay lives of the past, lyrical meditations on queer Asian precarity, a virtual event honoring the life of Harvey Milk, a podcast series about gay pulp fiction, a novel that explores identities, feminism, colonialism, and sci-fi TV show about telepathic human connections. Through myriad human expressions, we honor those who have passed and celebrate queer lives on Memorial Day.

Today, May 22, is Harvey Milk Day, and we’d like to honor the civil rights activist, school teacher, and politician. As the first openly gay elected official in the history of California, Milk served as a member of the San Francisco Board of Supervisors in 1977, after he moved from New York City and opened up a camera shop that became a safe refuge for gay residents in the Castro District. One of his most notable feats as a politician was his defense for gay rights against State Senator John Briggs, specifically the Briggs Initiative introduced by Briggs to ban gay teachers from schools. ONE Archives at the USC Libraries has numerous documents related to Milk, including iconic photographs in the Pat Rocco photo collections.

This year, a virtual celebration will take place in lieu of a block party in the style of celebrations that followed the White Night Riots, during which demonstrators stormed the streets in Castro to protest against the unjust court decision that acquitted Dan White of first degree murder charge of assassinating Harvey Milk. Read more about this virtual event.

Join the “Harvey Milk’s 90th Birthday Block Party” online from 6-9pm PDT today, on Friday, May 22. The event will be emceed by local drag queen and chef Juanita MORE!, and will feature performances by Persia and Bionka Simon, and music from deejays Beck Knock, DJ Kidd, Jim Hopkins, and Paul Goodyear.

A podcast dedicated to gay pulp fiction? Yes, please! Gay Pulp podcaster, Robert Maril, said in an interview with NewNowNext that he would “…choose which one to record by the salaciousness of the title and the blurb on the front cover.” ONE Archives at the USC Libraries has one of, if not, the largest collections of queer pulp novels. We love hearing them read aloud on Gay Pulp!

It’s not hard to see why Bernardine Evaristo’s novel won the 2019 Booker Prize. Following the interconnected stories of a group of mostly black, women, and queer characters, each chapter is told in a different person’s voice and adds new layers to the tale. The novel starts with Amma, a radical black lesbian socialist playwright whose new play, The Last Amazon of Dahomey, is premiering that night at the National Theatre in London. From there, the story spins out across multiple continents and generations, and folds back on itself in surprising (and sometimes disturbing) ways.

The Smithsonian Asian Pacific American Center’s A Day in the Queer Life of Asian Pacific America is an online exhibition that explores the complexity of the intersection of queer and Asian American identities. Queer Check-Ins is a set of 12 video poems curated by Franny Choi, developed in partnership with Kundiman, an organization dedicated to Asian American creative writing. In each video, a poet takes a unique approach to approximating their truths in identities, life experiences, and stories. Some are abstract and pastoral, others are bold and performative. All are animated with queer and Asian precarity. In the curatorial statement, Curator Franny Choi provokes by citing Ocean Vuong, “loneliness is still time spent / with the world.”

May is Asian Pacific American Heritage Month. June is LGBTQ Heritage Month. As soon as May is over, June comes along. There is not a day in which these months intersect. Every year around this time, I go on a relentless quest for a source of inspirations and belonging in the queer and Asian American continuum. I found it here this time.

My recommendation: sit in a comfy chair, next to a warm drink. Clear your Sunday afternoon to watch these lyrical video poems.

Sense8 was released in 2015 on Netflix and was the first original show on the platform to draw me in. It’s an incredibly queer sci-fi series created by the brilliant Wachowski sisters and J. Michael Straczynski. The story centers around the lives of eight people, all who live in different cities across the world. Each character eventually discovers that together they form a cluster of “sensates,” or people who are mentally and emotionally linked. Not only can they communicate with one another telepathically, but they’re able to share their knowledge, language, and skills, which helps them all struggle against the powerful forces of an oppressive supranational organization. With stunning cinematography (they filmed in eight locations around the world) and a compelling storyline, the series explores topics of gender, sexuality, intimacy, and family often marginalized in mainstream science fiction series.

Sadly, this thrilling series was cancelled after two seasons, which (rightfully, in my opinion) caused mass outage amongst its devoted fanbase. After much pressure, Netflix eventually allowed a 2 hour finale to wrap up the blockbuster series. If you haven’t seen it yet, I highly recommend it!

The Gay Rub is a documentary short (16 minutes long) featuring the work of Steven Reigns, an LA-based poet devoted to collecting rubbings from LGBTQ historical markers, signs, tombstones, cenotaphs, plaques, and monuments. Reigns’s beautiful collection was featured at the ONE Gallery, West Hollywood in 2014. This exhibition helped to draw attention to the historical markers and the LGBTQ experiences that prompted them. Consider watching this short film on this Memorial Day.

This “queer(ish) video archive” on Instagram is a precious gem that never ceases to entertain me when mindless social media scrolling falls short. You can find video content ranging from pop culture, art performances, to international music videos. They also drop curated Spotify playlists every week. Add them to your Instagram follows!

Image credits: (1) Harvey Milk in San Francisco pride parade, 1978. Pat Rocco photographs and papers, ONE Archives at the USC Libraries. Pat Rocco, photographer. (2) Cover of In Drag, Len Harrington. Pulp Fiction Collection, ONE Archives at the USC Libraries. (3) Cover of book Girl, Woman, Other by Bernardine Evaristo. Hamish Hamilton, publisher. Copyright for the cover either belongs to publisher or artist. (4) Courtesy of the creators of Queer Check-Ins curated by the Smithsonian Asian Pacific American Center. (5) Courtesy of Netflix. (6) Poster for The Gay Rub, a documentary by Michael J. Saul. (7) Screenshot of @glitter_archives grid on Instagram. 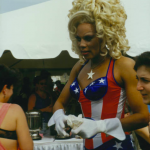 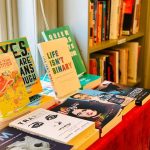