In Issue 11, we examine the creativity and tenacity of LGBTQ community making. Queer political and cultural organizing is often about reclaiming spaces and redefining places of belonging. We offer LGBTQ stories and strategies of building a home, community, nation-state, and utopia. We share an archival image collection exploring home and safety, nonfiction book about the defense of gay rights in 1950s and 60s United States, an essay about queer futurist visions during the pandemic, social media community for those who read books by queer authors of color, and a day of celebrations for queer APA/API heritage. We invite you to build spaces of queer belonging and security with us.

I love the new online exhibition Safer at Home, a journey through images from ONE Archives at the USC Libraries collection organized by staff curator, Alexis Bard Johnson. The selected items resonate with and reflect on the idea of “safer at home.” These archival materials act as a mirror—bringing the past into the present and offering perspective on what is happening today. They highlight people, events, and activities, and offer inspirations and comfort for us in the present.

Curator Lexi Johnson has organized a series of virtual studio visits and conversations with queer artists related to the exhibition throughout the month of June; learn more and register here.

From the Reading Room (Blog)

From the Reading Room is our new blog that features writings contributed by the ONE Archives Foundation’s LGTBQ Research Fellows. Since 2018, the fellowship program has welcomed more than 20 scholars, curators, and independent researchers to conduct research at ONE Archives at the USC Libraries. After two years, we have compiled research briefings from each Fellow and redesigned the blog interface. Now 22 articles are available in a new format on the open web for the public.

We invite you to visit From the Reading Room and explore the path of each researcher’s journey at the Archives. Each article details a researcher’s process and line of inquiry, with images of their archival findings and interpretations of their discoveries. Topics from the 2019–20 Research Fellows include: abolitionist AIDS activism, youth organizing, gay pornography and mourning, photography and gay identity politics, Black queer aesthetics, conversion therapy, queer sex work, transsexuality, LGBTQ archives, and the border politics of AIDS care.

The Future in Catastrophic Times (Essay)

During these uncertain times, I’ve had a difficult time both being in the present and envisioning what the future will look like. In this essay written by queer scientist Joseph Osmundson, I’m reminded that queerness offers me and YOU the tools to navigate life during this pandemic. When I need a break, I can take a moment to breathe and reflect on these two quotes from Osmundson:

“Live queerly. Embrace the small pleasures of the here and now, this moment of forced isolation, and build a future more aware of the isolations and injustices it was too easy to ignore in the past.”

I’ve already pre-ordered my copy of The Deviant’s War: The Homosexual vs. The United States of America by historian Eric Cervini, which is scheduled for release on June 2. The book traces some of the earliest organized efforts toward LGBTQ rights in the 1950s and 60s, centered around the story of Frank Kameny, one of the founders of the “homophile movement.” Kameny was fired from his federal government job when he was discovered to be homosexual and, in response, he co-founded the Washington, D.C. branch of the Mattachine Society to protest his firing and the government’s treatment of gays and lesbians.

Dr. Cervini researched thousands of records from the Library of Congress (where Kameny’s papers are held) and ONE Archives at the USC Libraries for firsthand accounts, organizational documents, and personal papers, all documenting this critical, though often forgotten, time in our history. It was Kameny and his peers, along with civil rights leaders like Bayard Rustin, that set the stage for future activists.

ONE Archives Foundation will co-host author Eric Cervini in conversation with screenwriter/producer/activist Dustin Lance Black for a virtual book tour event on June 6! Register for this event.

I am hooked on this TV show for two main reasons: 1) I’m a devoted fan of actor Sandra Oh and 2) Villanelle is a stunningly constructed queer villain whose only weakness is love. This spellbinding thriller follows an intelligence agent (i.e. spy) tracking down a serial killer who begins to unravel a web that’s much more tangled and ingrained than it first appears. Currently about to conclude its third season, Killing Eve features a complex, visceral, queer chase between its two main characters, and excellent visual storytelling.

Somehow in my Instagram browsing, I came across the Lupita Reads account and I am so happy I did! I’m an avid reader, and her book recommendations are solid. Not only is Lupita’s Instagram account #BookPorn, she also posts fantastic book recommendations by queer folx of color. I would highly recommend following Lupita to help you build your reading list.

QNA: Quarantine and Me (Virtual Event)

Seeking social connections during the quarantine is an imperative. Time spent interacting with strangers who share an interest or social category can be nourishing. This is even true for introverts. (As an introvert, I’ve mostly enjoyed solitary time reading and gardening on weekends.)

If you’re looking for queer Asian belonging, I recommend “QNA: Quarantine and Me,” a virtual event organized by @qna.la, a LA-based queer and Asian community group on the last day of May, APA/API Heritage Month. Queer Asian Pacific American poets, artists, and performers will lead conversations on plants, poetry, comedy, cannabis, and queer nightlife in the afternoon. An afterparty will follow in the evening.

Come, be yourself, and celebrate. I’ll see you there.

Image credits: (1) Jim Kepner in his Lexington Avenue apartment, circa 1970s, International Gay & Lesbian Archives Records, ONE Archives at the USC Libraries. (2) Six of One – Half a Dozen of the Other. Cartoon from Baloney Country Press, Louisville, 1932. Prostitution Subject File, ONE Archives at USC Libraries. Unknown artist. (3) Man with medical flu mask. Marco Verch, photographer. Licensed under Creative Commons 2.0. (4) Promotional image for The Deviant’s War: The Homosexual vs. The United States of America event. (5) Poster for Season 2 of Killing Eve. BBC America/AMC. (6) Courtesy of @lupita.reads. (7) Courtesy of Queer and Asian Los Angeles. 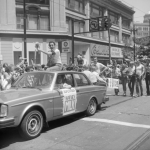 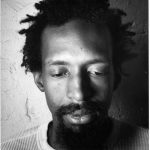