The following is a list of resources for the study of LGBTQ History. 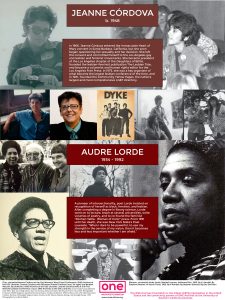 The ONE Archives Foundation, Inc. is the leading provider of innovative, high quality traveling exhibitions that educate, engage, and enthuse the general public about significant events and individuals in LGBTQ history.

The exhibitions feature hundreds of rare images and many never before seen documents from ONE’s renowned collection along with informative text that enrich and deepen the general public’s knowledge of LGBTQ history.

Our traveling exhibitions build upon ONE’s long legacy of providing innovative, ground breaking educational programs about the LGBTQ experience to worldwide audiences for the last 60 years. LGBTQ history exhibitions are ideal for:

Each ready to install panel exhibition is composed of 15-40 lightweight foam core panels ranging in size from 18″ x 24″  to 24″ x 36″. Exhibitions can be downloaded as high resolution PDF’s for digital presentations or for printing locally, or can be shipped fully printed and ready to go. Exhibitions can also be purchased in sections. Depending on the unique needs of the space, the panels can be displayed on easels, secured to a wall, or hung. For more information and to preview these panels please click here.

GayData.org serves as a no-cost, open-access clearinghouse for the collection of sexual orientation & gender identity data and measures. This site also provides knowledgeable analysis, commentary and expert “how to” information on gathering such data effectively in scientific surveys, questionnaires and studies.

GLAAD has worked with news, entertainment and social media to bring culture-changing stories of LGBT people into millions of homes and workplaces every day.

The Intersex Society of North America (ISNA) is devoted to systemic change to end shame, secrecy, and unwanted genital surgeries for people born with an anatomy that someone decided is not standard for male or female.

Lambda Legal is a national organization committed to achieving full recognition of the civil rights of lesbians, gay men, bisexuals, transgender people and those with HIV through impact litigation, education and public policy work.

Founded in 1990, NLGJA is an organization of journalists, media professionals, educators and students working from within the news industry to foster fair and accurate coverage of LGBT issues. NLGJA opposes all forms of workplace bias and provides professional development to its members.

Human Rights Watch is a nonprofit, nongovernmental human rights organization made up of more than 280 staff members around the globe.

The Lesbian and Gay Archives Roundtable (LAGAR) was founded in 1989 by members of the Society of American Archivists who were concerned about lesbian and gay history and the role of lesbians and gays in the archival profession.

Freedom to Marry is the campaign to win marriage nationwide. We are pursuing our Roadmap to Victory by working to win the freedom to marry in more states, grow the national majority for marriage, and end federal marriage

Anon-profit organization dedicated to engaging in effective advocacy for transgender people in our society. The TLPI brings experts and advocates together to work on law and policy initiatives designed to advance transgender equality.

Affordable Colleges Online Organization created this guide to show LGBTQ students the various on-campus and online resources they can use to help make college a more welcoming and supportive experience. The guide also includes interviews with a pair of diversity experts who lead student inclusion efforts on campuses today.

Here is a comprehensive list of speeches for teachers and educators to use while teaching lessons about LGBTQ history:

The Hope Speech
June 25, 1978 at the Gay Freedom Day Parade
Summary: The “Hope Speech” became Harvey Milk’s stump speech. He gave a skeletal version when he declared his candidacy in 1977 and an expanded version in 1978 for the San Francisco Gay Freedom Day Parade, later known as the Gay Pride Parade. For that parade, Milk commissioned his friend Gilbert Baker to come up with a logo; Baker created the gay pride Rainbow Flag, which first waved at that parade. Chicago native and science fiction writer Frank Robinson, also Milk’s speechwriter and a close adviser, helped pen the “Hope Speech.” In the speech, Milk references adversaries Anita Bryant and California legislator John Briggs, who campaigned nationally against gay rights. Addressing gay youths across the United States afraid to come out, Milk cites his own election as a gay politician in San Francisco as a testament of hope. For those youths contemplating suicide or staying in the closet, there were two new options, Milk said: “Go to California, or stay … and fight.”

Lesbianism and Feminism: Synonyms or Contradictions?
April 14, 1973
By Robin Morgan
Summary: This speech provides an overview of the divide that has existed between straight women and lesbians in the Women’s Movement. It contends that this divide is unnecessary because there is not a fundamental conflict between lesbianism and feminism. Therefore, all women, regardless of their sexuality, marital status, race, or social class should work to accomplish their feminist goals together.

Speech at NYSCGO Demonstration
July 11, 1976
By David Thorstad
Summary : This short speech explains how crucial it is for the LGBT community to actively fight against their oppression and to advocate for complete equality.

Gay People on Television
August 17, 1976
By Newton Deiter
Summary: In this speech, Newton Deiter presents the Gay Media Task Force’s official stance on the portrayal of gay men and lesbians on television. The Task Force believes that television, and those that create it, have an obligation to portray social realities of all types, including the lives of gays and lesbians.

An Open Letter to Anita Bryant
January 1978
Summary: This brief speech is the voice of a lesbian feminist collective directly addressing Anita Bryant. Their intention is to proclaim their humanity by explaining that they are women, like any other woman, but with the added burden of social invisibility.

Our Demands: March on Washington for Lesbian and Gay Rights
October 11, 1987
Summary: This speech details a list of demands that address the inequalities that the LGBT community faces. These demands range from legal recognition of LGBT families to the repeal of sodomy laws and other forms of discrimination on the basis of sexual orientation and HIV status.

Remembering Gay Victims of the Holocaust
April 21, 1993
By Gerry Studds
Summary: This speech, delivered to the House of Representatives, details some of the ways in which the LGBT community was victimized by the Nazis and calls for the official acknowledgement of this horrific persecution.

Remembering Jim Kepner
May 22, 1998
By Barbara Gittings
Summary: This speech, given by a close friend of Jim Kepner (the co-founder of ONE Magazine), explains the great influence that Kepner had on the LGBT civil rights movement.

A Celebration of Jim Kepner’s Life by Franklin Kameny May 22, 1998
May 22, 1998
By Frank Kameny
Summary: Frank Kameny’s speech celebrates the success of the LGBT civil rights movement from the perspective of someone who was on the front lines of the movement. He extols the progress that has been made without neglecting the issues that remain. He finishes by honoring Jim Kepner and his dedication to the movement.

Celebrating the Memory of Matthew Shepard by Mark Udall Oct 14, 1999
October 14, 1999
By Mark Udall
Summary: This speech details the tragic death of Matthew Shepard, a young college student who was murdered for being gay. The speech was delivered to the House of Representatives with the goal of motivating them to pass the Hate Crimes Prevention Act, hopefully ensuring hate crimes will never again go unpunished.

The Tragic Death of Matthew Shepard by Nancy Pelosi Oct 18, 1999
October 18, 1999
By Nancy Pelosi
Summary: Nancy Pelosi’s speech urges congress to pass the Hate Crimes Prevention Act. By providing an account of recent hate crimes, she reminds congress of how much prejudicial hate still exists and demonstrates the need for such legislation.

Remarks at the Millennium March for Equality
April 30, 2000
Troy Perry
Summary: This speech acknowledges the pain that organized religion has inflicted on many LGBT people but discourages LGBT Americans from renouncing religion. Instead, the reverend emboldens his fellow LGBT Americans to remain faithful even when doing so seems impossible.

The below resource list is a comprehensive list of books to aid in the teaching of LGBTQ history:

About Us
The ONE Archives Foundation is a 501(c)(3) charitable organization with the EIN Number: 95-3660779. Your individual commitment to the ONE Archives Foundation is more important than ever before. Please consider making your tax-deductible contribution today! To find out more about the various ways to give, please click here. For assistance with processing your donation, please call (323) 419-2159.
Join Our Mailing List