In 2001, renowned fine art and celebrity photographer Michael Childers decided to move in a different direction: he began to produce a series of experimental photographs that attempted to render the human form into surreal distortion. The result was a series of sensual and sometimes haunting photographs that set a group of individuals within an expansive atmosphere of darkness and mirrored reflection. The Distortions series, as it came to be called, was produced over the course of three years and featured participating subjects from a range of racial, sexual, and gender identifications.

Throughout this series, Childers channels the legacy of the abstracted, elongated, and mirrored body set forth in photographs by André Kertész and Bill Brandt, avant-garde films by Jean Cocteau, and sculptures by Henry Moore. Yet, Childers makes this experimental representation of the body his very own. It is his professional experiences in the worlds of film, dance, and theatre that undoubtedly inform his unique artistic vision. A fashion shoot utilizing fun house mirrors ushered in his initial idea for the series, and later, commercial photography projects with dancers and yogis led him to consider how fit and flexible individuals could activate a mirrored space. It was through the creation of a custom black velvet tent in his studio with motorized concave and convex mirrors that the Distortions series was finally born, establishing Childers as an artist whose oeuvre extends beyond traditional portraiture. With Distortions, Childers liquifies reality and constructs a new language to explore notions of beauty, the erotic, and the bizarre.

Michael Childers: Distortions is guest curated by Joseph Daniel Valencia. The exhibition is organized by the ONE Archives Foundation, Inc. in collaboration with the ONE Archives at USC Libraries.

Michael Childers has been a renowned film, dance, theater, and fine arts photographer for more than forty years. Born in North Carolina, Childers studied film at UCLA, where he directed student films and began his photography career under the tutelage of Robert Heineken and Edward Teske. Childers went on to become a founding photographer for Andy Warhol’s Interview and After Dark magazines, and his commercial success has led him to produce over 200 photographic covers for national and international magazines, including Dance Magazine, Esquire, Elle,GQ, London Sunday Times Magazine, Paris Match, Life, TV Guide, Vogue, and Vogue Italia, among others. In addition to magazine covers, Childers has created more than 100 film posters for major motion picture studios, and in 1988, Childers won the award for Best Poster of the Year from the New York Art Director’s Circle for the film Siesta.

Joseph Daniel Valencia is an arts writer, curator, and administrator. Between 2016-2018, he served as curatorial assistant for Laura Aguilar: Show and Tell, an exhibition co-organized with the UCLA Chicano Studies Research Center as part of the Getty’s Pacific Standard Time: LA/LA initiative and on view at the Vincent Price Art Museum at East Los Angeles College (2017-2018), Patricia and Phillip Frost Art Museum (Miami, 2018), the National Museum of Mexican Art (Chicago, 2019), and the Leslie-Lohman Museum of Gay and Lesbian Art (New York, 2020). He is an MA Candidate at the USC Roski School of Art and Design and holds a Bachelor of Arts in Art History from California State University, Fullerton. 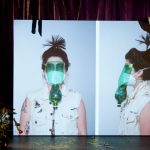 A grammar built with rocksPast Exhibitions 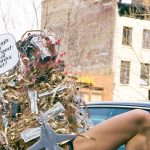 The Gutter Art of Stephen Varble: Genderqueer Performance Art in the 1970s, Photographs by Greg DayExhibitions, Past Exhibitions