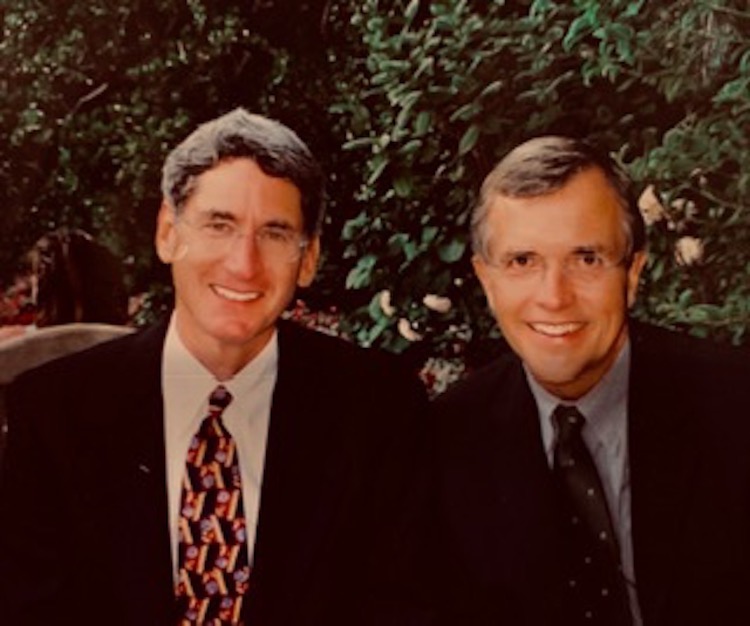 Program Founders, Rob Saltzman and Ed Pierce, have been strong supporters of LGBTQ organizations both locally and nationally. Rob and Ed met as students at Harvard Law School in the late 1970’s.  They were together as a couple for 36 years from 1979 until Ed’s death in 2015 at age 63. Rob and Ed were legally married in California in 2008.  Their lives together were focused on friends, family and children, combined with a lifelong passion for social justice and community service.

Ed practiced law in Beverly Hills and Los Angeles. Notwithstanding his self-professed ignorance of all things technological, Ed finished his professional career as General Counsel of the pioneering internet social network site, GeoCities. At GeoCities, Ed led the firm through several rounds of venture financing followed by a successful public offering and subsequent sale in 1999 to Yahoo! Inc. Ed’s skill and expertise were credited with helping GeoCities become one of the most successful internet sites of its era.

In the 1980’s, Rob worked as Legal Affairs Deputy for then-LA County Supervisor Ed Edelman, and then as Special Counsel to the LA County Department of Health Services. In both positions, Rob worked on a wide range of issues including improving County services for the LGBTQ community. From 1988 until his retirement in 2015, Rob was Associate Dean and Professor of Lawyering Skills at the USC Gould School of Law. At USC Rob played a key role in diversifying the law school student body. Rob also founded and directed the USC Law School’s academic support program designed to assist students struggling to perform at their best.

From 2007-2016, Rob was one of five civilian Police Commissioners for the City of Los Angeles, responsible for oversight of the LAPD.  In that capacity, Rob worked to improve all aspects of the LAPD’s interactions with the LGBTQ community. Rob also was instrumental in reforms of LAPD use-of-force policies and improving transparency in the LAPD. One of Rob’s signature accomplishments was the LAPD’s termination of its relationship with the Boy Scouts of America (which affirmatively discriminated against LGBT youth and leaders). With Rob’s strong support, the LAPD then created its own LAPD Cadet Program open to all youths without regard to sexual orientation, gender identity or gender expression. The LAPD Cadet Program has become the LAPD’s largest and most successful outreach program throughout all of the many diverse communities of Los Angeles.

Both Rob and Ed were early and strong supporters of the LA LGBT Center where Rob served on the Board of Directors. Ed served for ten years on the board of directors of GLSEN (the Gay Lesbian Straight Education Network) helping to fight bullying in middle- and senior-high schools. Rob served for fifteen years first on the Board of the Gay and Lesbian Victory Fund and subsequently on the Board of the Gay and Lesbian Victory Institute, helping to elect Out LGBTQ leaders to government positions. President Obama appointed Rob to the White House Commission on Presidential Scholars where he served until 2017. Rob and Ed served together on the Advisory Board for the David Bohnett Foundation; Rob still serves in that capacity. Following in Ed’s footsteps, Rob joined the GLSEN board in 2018.